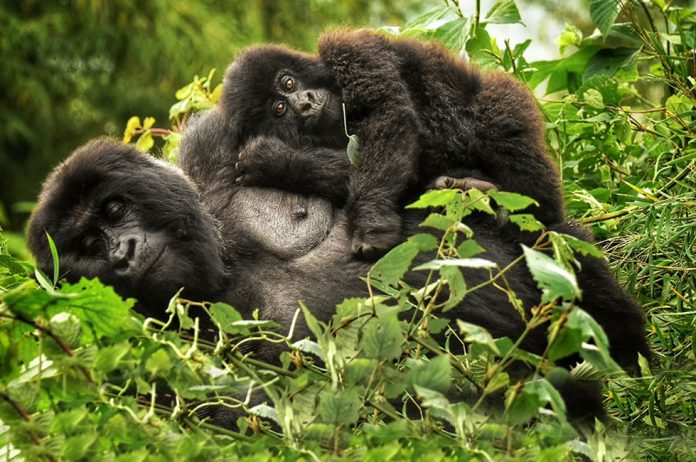 The buzz at the foot of the Volcanoes National Park in northern Rwanda on Wednesday was yet another sign of how eco-adventure tourism like mountain gorilla trekking has high prospects for Rwanda.

In the morning breeze, more than 100 tourists interacted with Rwandan tourism officials, including CEO of Rwanda Development Board (RDB) Clare Akamanzi, before embarking on their journey to the park.

Akamanzi reiterated the fact with tourists that security organs contained the situation and restored order following a security incident, where a group of gunmen last week killed 14 in an armed attack in Kinigi sector, which is close to the park.

Among the tourists, at least 59 tourists from different countries were there to see mountain gorillas while 68 others were visiting the park for other activities such as hiking the Virunga Mountains and visiting other primates such as golden monkey.

“I feel excited to visit gorillas because they are unique species with complex behaviors,” an American tourist who gave her name only as Lisa told reporters.
“Even before seeing them I think the walk alone to reach to the gorillas offers an amazing lifetime experience,” she added.

There are over 1,000 mountain gorillas living in the world, more than half of which live in the Virunga Mountains, where Volcanoes National Park lies, according to World Wildlife Fund.
Mountain gorillas contribute about 90 percent of tourism revenues from Rwanda national parks, RDB said in a statement released in February. The central African country sold 15,132 mountain gorilla permits worth 19.2 million U.S. dollars to tourists in 2018, statistics from RDB showed.

The attack didn’t scare off tourists who were still confident about the security of Rwanda. “We feel 100 percent safe. We feel very welcome. I love Rwanda,” Gordon Higman, a tourist from Australia, told reporters.

Several hoteliers in the area sounded an upbeat tone about their businesses.
Leonard Harerimana, assistant manager at a hotel located close to the park, said the attack did not affect tourism activities and didn’t affect business.

The same day tourists went to the national park to track gorillas normally, and those who do hiking in the Virunga Mountains did it normally, he said.

Michael Hughes, manager of a lodge near the national park, said the “truth is hoteliers didn’t feel any effect though they had to delay new arrivals and departures a bit.”
“I honestly believe right now everyone is very safe. There should be no reason why tourism could be affected,” he said.

Choosing a Rental Car for Travels in Rwanda

Factors to Consider When Renting a Car in Rwanda