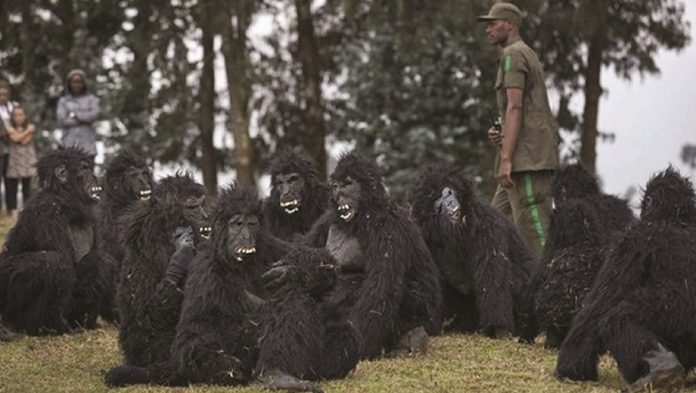 Recently Rwandans celebrated the birth of 18 baby gorillas at the 10th anniversary of Kwita Izina, the naming ceremony of these rare mountain gorillas took place on July 3rd 2015 at the slopes of Virunga mountains at Kinigi in the north western part of Rwanda. More than 40,000 residents from Musanze and all over Rwanda and visitors from the entire world attended the ceremony. Every year Rwanda organize this event as a way of naming new born mountain gorillas and also to promoted tourism and this year’s Kwita Izina was held under the theme: “A Decade: Conserving-Empowering-Growing.”

As he was speaking, Ambassador Valentine Rugwabiza of Rwanda Development Board (RDB)’ CEO said: “this is the 10th time as we celebrate, the growth of the gorilla family by naming 18 baby gorillas born over the last year this is a very big number as compared to previous years, bringing the total population of these rare species to over 600 individuals in the Virunga mountains.” He added by thanking the good collaboration by the government of Rwanda, the local community neighboring the Volcanoes National Park and conservation partners that are the key people in the increase of these endangered mountain gorillas.

In a special way Rugwabiza thanked the local communities in the sustained conservation of this Volcanoes National Park Rwanda especially the protection of the gorillas and their habitat without their effort to stop poaching activities gorillas would be no more in the volcanoes tropical forest.

Various activities were organized to mark the 10th Kwita Izina ceremony including conservation, business, cultural and entertainment that led up to the big day. There was also the launch of Basumba Primary School in Bigogwe, Nyabihu District in the northern part of Rwanda. The school was constructed by the local community surrounding the park from the shared revenue scheme which gives 5% of tourism profits from the national park to the local community and the school contains six classrooms.

Craig Sholley the Vice president of philanthropy and marketing for the African Wildlife Foundation (AWF) was invited on behalf of (AWF) to vote on the gorilla names, during his speech he said “You cannot succeed in conserving these critically endangered species without the collaboration and support of the people who live closest to them, without their effort the life of these mountain gorillas is in danger. “The Kwita Izina ceremony shows that, from the government to the local communities, protection of mountain gorillas stems from a sense of duty and a source of pride,” he said.

About 120 local and international tour operators was part of the ceremony and they came to experience Rwanda and took park in business-to-business meetings organized with Rwanda Air. Also the Kwita Izina guests joined in Global Umuganda (community work) in Nyamata. They also partook in the Igitaramo, a community celebration with residents in Kinigi, Musanze district at which local artist Jay Polly performed. In the past nine years since the event was established, 161 gorillas have been named in a celebration of nature and the communities who protect the majestic mountain gorilla.

Choosing a Rental Car for Travels in Rwanda

Rwanda Development Board set to Grade 30 More Hotels this Year

Why Go Gorilla Trekking in Rwanda