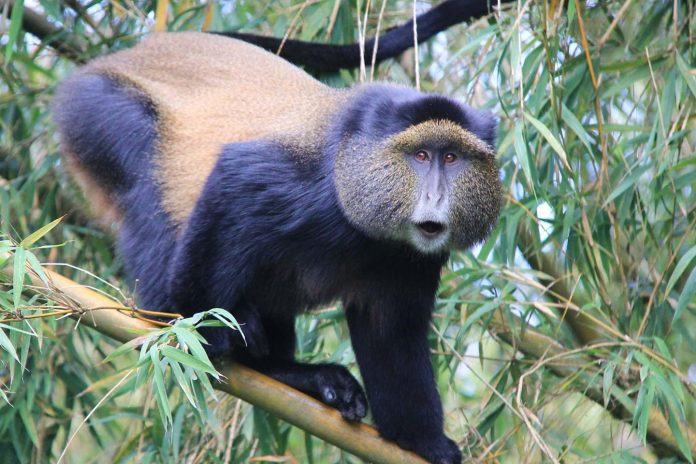 Primates Safaris are growing in popularity to tourists looking for safaris in Africa. There are several East African and Central African countries that host several primates in Africa.

Thousands of visitors come to Rwanda to view the great mountain gorillas. These are found in the Volcanoes National Park located in the northern part of the country. Currently there are about 300 mountain gorillas that live in this well protected national park and visitors can see them from a close range within the park. Today gorilla trekking is the most popular adventure that pull tourists to Rwanda.

Volcanoes National Parks also hosts the striking golden monkeys that live within these mountainous jungles. Visitors can also take a golden monkey tracking tour to see these old monkeys that are found in the Virunga Mountains in Central Africa.

Though Rwanda is most known for hosting the mountain gorillas, deep in Rwanda’s Nyungwe forest lie over 13 species of primates. Nyungwe is located in South Western Rwanda and it is the only park in East Africa offering canopy walks. Covering over 1000sq kms, the park is characterized with tall old mahogany trees, ebonies and giant tree ferns. The parks hosts incredible wildlife and the primates include chimpanzees, black and white colobus monkeys, the silver monkeys, vervet monkey, the olive baboon, L’Hoest’s monkey, grey-cheeked mangabeys, the red-tailed monkey etc.

If you would like to see chimpanzees, Nyungwe Forest is among the best destinations in Africa where one can see chimpanzees. Nyungwe is a fascinating destination for primate lovers where an estimated 500 Chimpanzees live within the ancient tropical rain forest. Chimpanzee tracking in this park cost USD100 per permit and the activity starts very early in the morning.

On a tour in the Nyungwe Forest, brightly colored birds can be seen fleeting around, as well as butterflies that are seen everywhere. On a trek along the developed trails in the forest you can encounter larger forest residents, including a variety of primates for which Nyungwe National Park is renowned.

To get a real sense of the scale of Nyungwe, try East Africa’s highest canopy walk with a metal bridge suspended 50 metres above the forest. It’s not for the vertiginous but the views of Nyungwe sprawled out below are unforgettable. These include hundreds of lively Angolan Columbus monkeys in Nyungwe national park, and families of Baboons which can be found strolling leisurely through the savannah of Akagera National Park.