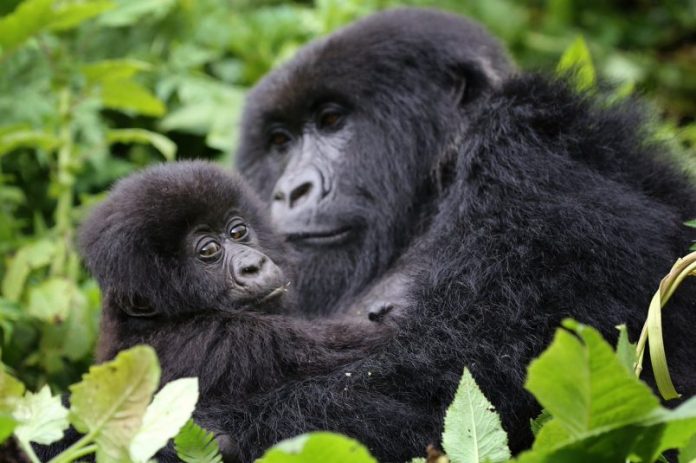 The first European to encounter an endangered ape was called Oscar Von Beringe; he decided that something must be done to conserve the population of these splendid creatures that suffered for a longtime due to human activities like poaching, deforestation, and illnesses, and in 1925 he convinced the Belgian government to create Africa’s first protected area, Albert National park which is now volcanoes national park. The 1st scientific study of mountain gorillas in the Virunga volcanoes then undertaken by George Schaller in 1959.

However his work was sustained by Dian Fossey from 1967 to 1985. She became a prominent primatologist and a researcher who studied and habituated these giant apes to human standards for a period of over 18 years. However, she was later killed in December 1985 in her line of duty by the said poachers whom she had made unpopular especially in Volcanoes National Park of Rwanda.

Mountain gorillas are the largest of the great apes family with an adult male silverback which age from 12 and above weighing up to 470 pounds and reach six feet. They are the second close relative of man after chimpanzees, bonobos and orangutans and they share almost 97% of human genes.

Mountain gorillas are dissimilar from monkeys for a variety of reasons: they are larger than monkeys, they can walk upright for a longer period of time, don’t have tails and have more developed brains. They are distributed in four groups, the western lowland gorillas; these normally live in Cameroon, the Republic of Congo, eastern DRC, Equatorial Guinea, Nigeria, Gabon and the Central African Republic.

The Eastern lowland gorillas mainly live in the Eastern Democratic Republic of Congo (DRC), Uganda and Rwanda. Mountain gorillas can only be found in three countries that’s Uganda, Rwanda and DRC. In Uganda these apes are found in two parks that’s Bwindi Forest National Park and Mgahinga national park. In Rwanda, these giants live in volcanoes and in Democratic Republic of Congo they live in Virunga national park.  The Cross River gorillas live in Cameroon, Gabon. The mountain gorillas are distinguished from lowlands relatives by their broader chest, longer hair, and a wider jaw. They also tend to be a bit larger than other gorillas.  Mountain gorillas are the only habituated gorilla family in the world and they can be seen safely in their natural habitat without any harm caused to tourists.

Mountain gorillas look to be shy, but when in danger, they can be hostile. They beat their chests and let out angry grunts and roars. The male silverback group leaders charge in case of any danger ready to protect the group against any threat. Mothers always fight to death to protect their young ones.  Rwanda mountain gorillas live in a group of 6-30 and over 10 habituated Rwanda gorilla families are recorded for tracking and each group is led by a male silverback. Other members in a group include several younger males, adults, juvenile females, and infants.

Gestation period; Females always give birth at about 10 years and will have more descendants every 3 or 4 years and it produces a single young one. Twin cases are so rare in gorillas. A male gorilla begins to breed between 12 and 15 years, when he is in charge of his own group..

Diet; Gorillas are mainly vegetarians; they eat leaves, buds, shoots, tuber, stalks, fruits and ferns and sometimes aunts. These plants seem to provide sufficient moisture so that gorillas do not need water; they spend most of their day foraging for food

Life span: They live to up to 50 years while in the wild where as in captivity they may live less than 35 years.

Threats: Gorillas are threatened by human activities such as poaching for the bush meat and medicine; diseases like Ebola also kill many gorillas, wild animals like lion, leopards attack and kill them especially babes. They are also affected by climate changes especially those that live highlands like mountains.

There are 10 gorilla groups in Rwanda; these include the Susa, group 13, kwitonda, Amahoro, karisimbi, Sabyinyo, Agashya, Omubano,Hirwa among othersA maximum of 8 people are allowed to trek each gorilla family which means that a maximum of eighty people can track the primates in volcanoes national park per day. Rwanda gorilla permits costs usd$750 per person per tracking including park entry fee and a ranger guide.