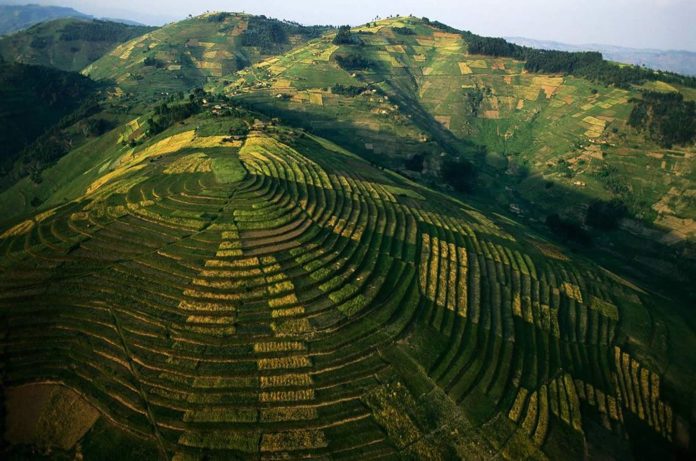 Like its counterpart Uganda, Rwanda is also a landlocked country and has no seaport, it neighbors countries like Democratic Republic of Congo in the West, Tanzania to the East, Uganda to the north, , and Burundi in the south. Rwanda occupy an area of about 26,338 sq km (10,169sqmiles), with a total population of about 13 million (UN estimates 2013 and it’s Africa’s most densely populated country. Rwanda is divided by great peaks of up to 3,000m (9,842ft) which run across the county from north to south. Rwanda is a very beautiful county with a moderate climate. The people of Rwanda majorly speak Kinyarwanda, French, English, and Kiswahili.

Fact 1: Kigali is the Cleanest City in Africa

Rwanda’s capital city is the cleanest city in Africa. It iss largest city is Kigali located within the heart of Rwanda. It is also the ultimate gateway to Rwanda with its airport located just about 7kms from the city centre. It’s a very attractive small city with a fantastic variety of flowering trees and plants from various points on the edge, there are outstanding views over the intensively cultivated and terraced countryside.

The capital Kigali is a center to very many tourist attractions like the genocide memorial center, national museum, cultural sites, international business, market center. It’s really very difficult to come on a safari to Rwanda without going for a Kigali city tour. Rwanda’s national currency is the Rwandan franc (Rwf.)

Fact : Rwanda Attained Its Independence in 1962

Rwanda obtained its independence on July, 1, 1962 from Belgium. It has a presidential system of government and Paul Kagame is currently the president of Rwanda.

The climate of Rwanda is made up of two wet seasons and two dry seasons, the short wet season lasts from October to November, and the main rainy season lasting from mid-march to the end of May. The dry season last from December to mid-march and from June to end of August. Rwanda has deep valleys and steep mountains and sometimes Rwanda is referred to as a country of ‘’a thousand hills’’

Fact 4: Rwanda is one of the only three countries that host Mountain Gorillas

Rwanda hosts about 400 individuals and its known as the leading mountain gorilla safari destination in the world.  Many visitors whole over the world come to this small African country to spend at least 1-2 hours with these endangered apes in their natural habitat.

Gorilla tracking in Rwanda is regarded as the most done tourist activity done on earth, over 80% of travelers to Rwanda go gorilla tracking. Gorilla tracking is done in the volcanoes national park in Ruhengeri Musanze district 2-3 hours from the capital Kigali.

Fact 5: Rwanda Had One of the Most Dreadful Genocide in the World

Rwanda’s dreadful genocide which took place in 1994 has not been forgotten; over 1 million people were killed within 90 days. The memorial museum in Kigali is a “must-see”. This terrible war took place between two ethnic groups that live in Rwanda, the Hutus and the Tutsis and this happened after the murder of the Presidents of Burundi (Cyprien Ntaryamira) and Rwanda (Juvénal Habyarimana) in a plane crash caused by a rocket attack On 6 April 1994.

The killings started immediately since the Hutu thought that the Tutsi where accountable for the tragic. The killings where herd in each and every town of Rwanda, people used pang, stick, stone and guns to kill each other. As a way of remembering the incidence, memorial sites were built, and there about 7 memorial genocide sites with in Rwanda these include Murambi Genocide Memorial Site, Gisozi Memorial site, Gisenyi, Bisesero, Nyamata, Ntarama Memorial sites. This day is celebrated every year.

Many visitors can’t leave Rwanda without visiting one of these memorial sites; it’s a heartfelt to hear testimonies from the survivors of this horrific war about how they survived these marauding killers. You will see remains of the deceased like rosary, pocket money, swords, cloths among others still laid on the ground

Fact 6: Rwanda is One of the Most Religious Countries

Fact 7: Rwanda is a Great Place to See Primates

For primate lovers the park is a home to the close relative of man the chimps which shares almost a half of the 98% of human genes, chimp tracking is the most done tourist activity at the park.

Other primates include baboons, black and white colobus monkey, silver monkeys, civet monkeys, red tailed monkey to mention but a few. It is also a home to over 300 species of birds. It’s also a home to mammal species which include civets, leopards, several cats, and other animals.

Fact 8: Akagera is the Only Savanna National Park in Rwanda

Rwanda has four national parks. Of these, Akagera National Park is the only protected Rwanda national park where game drives are done to meet the big five species. Wildlife species expected to see includes elephants, hippos, lion, buffaloes, crocodiles, warthog, and antelopes among others.

Fact 10: Rwanda is a Mountainous Country

Rwanda highest point is Volcan Karisimbi 4,519 m and its lowest point: Rusizi River 950 m and Kagera River is the Longest River in Rwanda. Lake Kivu is Rwanda’s freshest water body and the sixth largest lake in Africa, Very good for relaxing and many activities can be carried out at the lake like swimming, beach volleyball, exploring the lake on the boat to the nearby island.

Your safari to Rwanda will be a memorable one as you are privileged to view all these Rwanda facts but interesting attraction, for more information about Rwanda and things to do, contact us we will get back to you swiftly.

Rooftop Rental for Outdoors in Rwanda